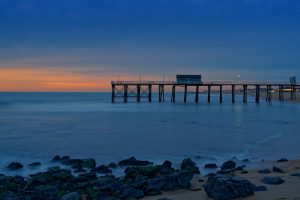 Summer 2021 is back in full force!  Many people are back out frequenting local bars and attractions in Belmar.  If you have been arrested for 2C:33-2A, disorderly conduct in Belmar, whether at Bar Anticipation, D’Jais or any place else,  I can help you.  These charges usually are related to remaining outside or inside a bar after being asked to leave.  If you have been charged with 2C:18-3B, defiant trespass, relating to a similar situation, I have appeared in Belmar for over a decade successfully defending  individuals charged with these types of offenses.

I have also successfully defended individuals charged in Belmar for underage drinking, resisting arrest, simple assault, possession of a fake ID and other drug offenses.  Oftentimes, in these situations the person is also charged with an Interference of Business Ordinance, 2016-915.   There is a mandatory appearance required if you have been charged with a disorderly persons offense in Belmar Municipal Court located at 601 Main Street and it is important to get the best representation.

Why call me?  I strongly believe that the best results come from dealing with one attorney from the inception of the case; from the first time you call me to the date of your appearance you only deal with me. We prepare the best possible defense and you will always maintain communication with me directly.  I have appeared in Belmar and Lake Como for well over a decade and I know how to best navigate you through this process and get the best possible results.

END_OF_DOCUMENT_TOKEN_TO_BE_REPLACED

CORONAVIRUS (COVID-19) IS REAL BUT LIFE CONTINUES: CONTACT ATTORNEY TARA BRESLOW-TESTA FROM THE SHELTER OF YOUR PLACE.

The nationwide quarantine inspired by Coronavirus (COVID-19) is unprecedented in the experience of most New Jersey residents. Citizens of New Jersey have been encouraged to shelter in place, to stay home and avoid social contact to prevent transmitting and/or contracting the respiratory disease that is proving fatal.  Unfortunately, several of our residents both in Freehold, as well as Red Bank, have been affected by the virus.

END_OF_DOCUMENT_TOKEN_TO_BE_REPLACED

Marijuana advocates in Vancouver, Canada send a message resonating all the way to New Jersey.

Medical marijuana has been legal in New Jersey since 2010 – with restrictions.

Recreational marijuana is not (yet) legal in New Jersey. And offenders who possess or distribute marijuana are dealt with harshly. But that could all change when New Jersey undergoes a regime change from the Christie Dynasty to whatever is coming next.

It is important to know the differences and the laws, because the difference could lead to arrest and conviction for possession or distribution of marijuana – which could lead to years to decades of prison time, harsh fines and a permanent criminal record.

And if you’re in the slammer when the rules (possibly) change a couple of months from now, you’ll miss out on all the legal fun.

END_OF_DOCUMENT_TOKEN_TO_BE_REPLACED

We’ve sometimes got trouble, right here in Holmdel township, with a capital T and that rhymes with P and that stands for the PNC Bank Art Center. This popular music venue in Holmdel has provided a venue for musical acts from symphonies to Sinatra to Springsteen to Phish to Sting over the years – but the festival environment has also spawned more than a little bit of trouble in the form of dozens of drug arrests, underage drinking, DUI arrests, fights, shootings.

If you’re a music fan who gets into trouble with a capital T, the first person you should talk to is Holmdel criminal defense attorney Tara Breslow-Testa. She is experienced with a capital E and can reduce possible sentences, fines and future consequences for anyone arrested around the PNC Bank Center.

END_OF_DOCUMENT_TOKEN_TO_BE_REPLACED

Whether you call it weed, pot, Mary Jane, grass, herb, or just plain old marijuana, it is no secret that the times – and the laws – are changing with respect to the usage of cannabis.

At least eight states have legalized cannabis for recreational usage, and about twice that number currently allow medical marijuana use. Thus, marijuana is now legal in about half of the states for one purpose or the other.

END_OF_DOCUMENT_TOKEN_TO_BE_REPLACED

A group of law enforcement agencies dubbed “Operation Justice Served”, consisting of many federal, state, county, and local officials, arrested 42 individuals over the last month for their involvement in a drug trafficking network.

Prosecutor Christopher J. Gramiccioni announced that the arrests were connected to a distribution network operating out of Freehold, New Jersey. The charges include possession and distribution of a number of different controlled substances including: heroin, cocaine, marijuana, and prescription pain medications classified as opiates, such as Oxycodone and Percocet.

“The joint efforts of these multiple law enforcement agencies involved in OPERATION JUSTICE SERVED have accomplished the mission of taking down this local drug trafficking network responsible for bringing drugs into the county and threatening quality of life and the safety of residents.” Gramiccioni said.

END_OF_DOCUMENT_TOKEN_TO_BE_REPLACED

Monmouth County judge sentenced a former Long Branch resident to jail for fatally hitting and killing a Monmouth County University student while under the influence of drugs.

Joseph Stovall, 48, was sentenced Friday, November 4th for accident that occurred on September 11th, 2013. Stovall, under the influence of Xanax, crashed into two cars that were parked because of an earlier fender bender on Jolin Avenue in Long Branch. Victoria Tropper, 21, and Thomas Triano, 49, of Cherry Hill, NJ were the two drivers involved in the earlier fender bender. While exchanging information, Stovall swerved, crashing into Tropper and her car, killing the senior psychology student on impact. Triano, whom was lucky to survive, walked away with several cuts. Stovall pled guilty on June 24th vehicular homicide and assault by while being under the influence of a non-prescribed Xanax. The Schedule IV controlled substance contributed to Stovall’s sentencing.

END_OF_DOCUMENT_TOKEN_TO_BE_REPLACED

Authorities from the Wall Township Police Department recently charged a man with driving while intoxicated (DWI) and drug possession after a motor vehicle stop. The man is now facing additional charges for aggravated assault, among other offenses, as police say he attempted to stab an officer with a pen while being processed at police headquarters.

The motor vehicle stop in question was conducted just after 1:00 a.m. on Sunday, July 31, at which time a Wall Township Patrolman stopped a driver near the northbound Garden State Parkway exit ramp on Highway 138. The driver, 28-year-old Staten Island resident Vincent Russo, was charged with DWI shortly thereafter.

END_OF_DOCUMENT_TOKEN_TO_BE_REPLACED

Officials from the Holmdel Police Department recently arrested two men who are now facing charges for numerous drug crimes after a search at a local residence revealed marijuana, prescription drugs, and drug paraphernalia.

According to a statement released by the Holmdel Police Department, police executed a search warrant at a residence located on Dogwood Court in Holmdel on June 3rd. During the search, investigators seized marijuana, drug paraphernalia, and prescription drugs, at which time they arrested Jonathan Diaz and Tyrone Spann.

END_OF_DOCUMENT_TOKEN_TO_BE_REPLACED

What is a Conditional Discharge? If you are eligible for a Conditional Discharge, it does not automatically mean that you will enter into the Program. Pursuant to NJSA 2C:36A-1, an attorney can make a Motion to suspend further court proceedings and place their client on a special type of supervised probation. Since this is an optional program, it is important that the defense attorney prepare evidence showing that their client is a good candidate for a conditional discharge. It is helpful to collect letters of recommendation, proof of employment, drug treatment, and any other information that helps prove that the defendant will benefit from such program.

An experienced New Jersey criminal defense attorney can advise you if entrance into a Conditional Discharge is something you should consider. For example, the State needs to meet their burden by providing all discoverable materials, including but not limited to a lab report, if applicable. If the State does not provide the proper materials, it is possible by way of a motion that the matter can be dismissed.  Also, if you enter into a conditional discharge, after completion of the program you still need to expunge the matter if you want the arrest off your record. It is important to be aware that by entering into a conditional discharge you will not be eligible for other diversionary programs in the future such as Pre-Trial Intervention (PTI). Thus, it is imperative to have an experienced criminal defense attorney on your side to help guide you through the Municipal Court system.